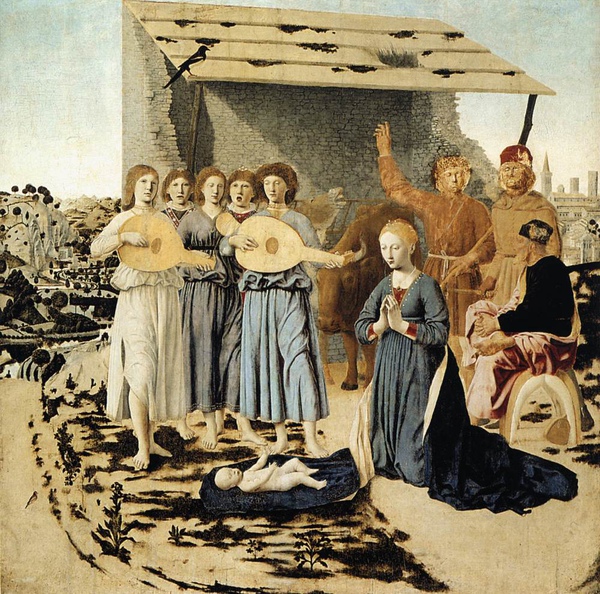 The winding landscape on the left and the position of the Christ-child, lying apparently helpless on the ground, suggest that Piero was aware of the way Flemish painters treated Nativity scenes. In fact, the Fleming Joos van Ghent had worked at the court of Federico of Montefeltro where Piero was employed. Nevertheless, the cool morning light and the Olympian stillness may seem typical of the southern Renaissance. The choir of singing angels have something about them that recalls the Athenian Acropolis and the Caryatids of the Erechtheion. While these musings are subjective, they are supported by Piero's known interests. For example, he wrote a book on the 'regular' bodies (the basic geometric structures that some have thought to correspond to the 'essence' underlying all existence) and their supposed relationship to the human figure; interests of this kind lay at the heart attempting to connect the central fact of Christian theology, the Incarnation, with the calm rationality of Classical thought, as had St Augustine of Hippo centuries before. 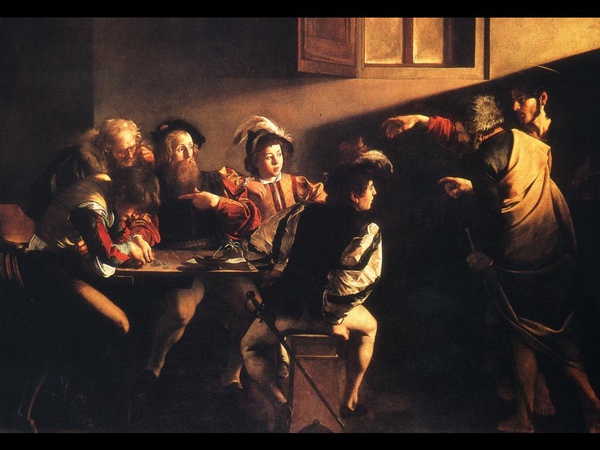 The response of the Catholic to the growth of Protestantism took the form of a movement now known as the Counter-Reformation. Its characteristic expression in art is the Baroque. The style brought together a passionate interest in naturalism with an equally compelling belief in the power of dramatic presentation. It was a theatrical art, which sought to convince those tempted to change their faith that the Roman Church was and would remain the only custodian of religious truth. If Protestantism seemed gloomy, Catholicism had no alternative but to assert its fundamental optimism. So Caravaggio, one of the most important figures in the Roman Baroque, presents us with a remarkable stage effect, in truth far in advance of anything that one could have expected to see in the contemporary theatre. Christ's entry into the house of Matthew, the money-changer, could have found no more dramatic expression, and the two well-dressed young bucks anchor the picture to the reality of the sixteenth century. In all this, Caravaggio seemed to go too far and too fast for his contemporaries and his work was slow to achieve the enormous influence that came later. 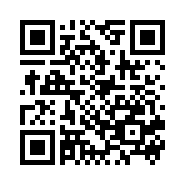